Living This Life Fully: Stories and Teachings of Munindra 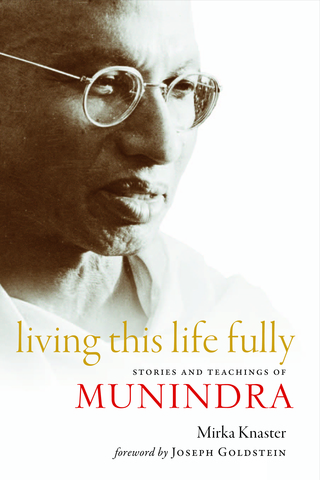 Order at local bookstores or CLICK to order online.
For a video of Munindra visiting California in 1977, click here.

FROM THE FOREWORD BY JOSEPH GOLDSTEIN:

"One of the first things that Munindra said to me when we met [in Bodh Gaya, 1967] was that if I wanted to understand the mind, I should sit down and observe it. The great simplicity and pragmatism of this advice struck a very resonant chord within me. There was no dogma to believe, no rituals to observe; rather, there was the understanding that liberating wisdom can grow from one's own systematic and sustained investigation.

"This, indeed, was the outstanding quality of Munindra's life. He always wanted to test the truth of things for himself, to see things firsthand and not simply believe what others had said. And it was this very quality that he encouraged in all of his students. Given the great diversity of Buddhist lineages and traditions, methods and techniques, Munindra's openness of mind became a powerful influence in all of our unfolding dharma journeys.

"...highlighting his great warmth and curiosity, his incisive wisdom and compassion, [t]hese stories are a dharma teaching in themselves, revealing how a great teacher takes every circumstance of life as a vehicle for deepening understanding."

"Far from a simple biography, Knaster's book should be read as a manual for an ethical, joyous, and meaningful life." http://www.huffingtonpost.com/peter-clothier/living-this-life-fully-a_b_5297103.html [May 9, 2014]

"There are people in our everyday lives who we meet and can say have changed us for the better. I now feel I have met Anagarika Munindra...by reading the stories of students...friends, and family whose lives he touched....I strongly suggest loosening the ties that bind for a while and reading Living This Life Fully. --Fellowship (summer 2013)

"There is no pizza in nibbana," interview by Danny Fisher, Buddhadharma Quarterly. https://www.lionsroar.com/there-is-no-pizza-in-nibbana-mirka-knaster-and-robert-pryor-on-anagarika-munindra [December 28, 2011]

"Living This Life Fully is a magnificent work, documenting the life of a man dedicated to the Dharma in a way that is truly rare these days." http://americanbuddhist.blogspot.com/2011/08/review-of-living-this-life-fully-life.html [August 30, 2011]

"It is the accounts of Munindra's compassionate wisdom that Knaster has done so well in describing...that does them both credit...I for one am most grateful to Mirka and Munindra for sharing such insight with the world." http://buddhaspace.blogspot.com/2011_02_01_archive.html [Feb. 26, 2011]

"A wonderful introduction to a teacher whose students are now household names, for example, Sharon Salzberg, Daniel Goleman, Jack Kornfield, and Joseph Goldstein. This deeply felt, loving portrait of a modern Buddhist master will also inspire those on their own journeys toward actualizing abstract ideals." Tricycle (winter 2010)

"Mirka Knaster has done the Buddhist world a great service with her inspiring spiritual portrait of Anāgārika Munindra...This is a truly marvelous book that brings Munindra-ji to life with hundreds of touching, edifying, and, at times, amusing anecdotes. Munindra denied being enlightened, but he lived an enlightened life." http://www.existentialbuddhist.com/2011/01/book-review-of-mirka-knaster%E2%80%99s-living-this-life-fully-stories-and-teachings-of-munindra/ [Jan 2, 2011]

"You’ll find in these stories the utter simplicity and uncompromised clarity of a teacher devoting his life to the Dharma. Quite illuminating if you haven’t found your own teacher, or better yet, if you’re going to try to get by without one."http://www.karenmaezenmiller.com/gift-exchange [Dec 26, 2010]

"Mirka Knaster has done a beautiful job of bringing the teachings of one of the most important guides in the west through her book..."
http://http://jonathanfoust.com/wordpress/?p=1985 [Dec 11, 2010]

"This is an excellent book on showing the way to being at one with the freedom of the present moment...You'll find powerful insights packed into just the first few chapters more than the entire length of a lot of books. It's a must have for a serious Dharma practitioner." http://thebuddhistblog.blogspot.com/2010/10/living-simple-life-stories-and.html [Oct 21, 2010]

"I have many wonderful memories of Munindra-ji...One of my very first teachers, he was a truly extraordinary little man who left an indelible impression on me. Check out the book and join the discussion at the Tricycle Book Club." Danny Fisher. RebelBuddha. [Oct 6, 2010]

"What a gift this book is. Like the life of the beloved Vipassana (Insight) meditation teacher Anagarika Munindra, Living This Life Fully combines scholarship with meditation practice....an inspiring book to my meditation practice, and an interesting read." http://www.goodreads.com/book/show/9144660-living-this-life-fully

"This is the only book I took with me on a recent trip to Myanmar (Burma). It was a perfect choice. To be in that country and have Munindra as my companion throughout the journey was a constant delight." http://www.amazon.com/Living-This-Life-Fully-Teachings/dp/1590306740

http://www.abuddhistlibrary.com/Buddhism/J%20-%20Navigation%20Pages%20and%20A%20List%20of%20Books/Navigation%20Pages/Lists%20of%20Files/Teachers.htm (scroll down to Anagarika Munindra for excerpts)

Diminutive yet striking in his signature white robes and white hat, Munindra was an enthusiastic, energetic, and immensely inquisitive Bengali meditation master who had a profound impact on people everywhere he went, even on many who never met him. Those whose lives he touched remember him not only for his erudition and expert guidance but, most importantly, for his embodiment of Dharma--he lived what he taught. Through his presence and actions, Munindra made otherwise abstract ideals come alive.

Like his fellow countryman Mahatma Gandhi, Munindra was one of those rare individuals who demonstrate seamless integration, rather than conflicted separation, between daily life and spiritual practice. Through his attitudes and behavior, he held out the potential of what is attainable: to be at home in this body, in this place, in this time, under these conditions; happy and at peace with oneself and in harmony with others.

Munindra was also an illustration of what neuroscientists are now able to confirm through sophisticated technology: By training the mind, one can change the brain so that positive emotions become enduring character traits, rather than just occasional states. Based on his personal knowledge, Munindra was convinced that even nowadays people are capable of tasting what the Buddha and his disciples experienced more than 2,500 years ago. What may seem out of the ordinary or even impossible is actually within reach of those who make the effort. Yet Munindra never pretended to be extraordinary, exceptional, or perfect. He was simply a flourishing human being, not a saint. With all his idiosyncrasies and fallibility, he walked the path and enabled others to walk it too.

For Munindra, spiritual life was not limited to meditating in silence, living in a monastery, or attending intensive retreats. Nor did a life steeped in Dharma have anything to do with arcane and esoteric doctrines or ritualistic and exclusionary practices. Munindra made Dharma highly accessible and himself widely available. His easygoing, outside-the-box, nonsectarian openness, as well as a no-frills, no-airs attitude, had great appeal. According to Munindra, Dharma was all about "living the life fully."

Living This Life Fully is divided into 16 chapters. Each one is devoted to a different quality of awakened mind and heart and to how Munindra embodied and taught that particular quality.

3. It's Really Possible to Wake Up
Saddha (Conviction)

4. Give Everything with an Open Heart
Dana (Generosity)

5. Take Care of Dharma and Dharma Takes Care of You
Sila (Virtuous Conduct)

6. Say What You Mean and Mean What You Say
Sacca (Truthfulness, Integrity)

7. I Made Up My Mind
Adhitthana (Determination, Resolve)

9. When the Fruit Is Ripe, It Will Fall from the Tree
Khanti (Patience, Forbearance)

10. If You Love Your Enemies, Then You Will Have No Enemies
Metta (Loving-Kindness)

12. There's No Pizza in Nirvana--Are You Still Interested in In?
Nekkhamma (Relinquishment, Renunciation)

13. Joy Is a Factor of Awakening
Piti (Delight)

14. Come and See for Yourself
Dhamma-vicaya (Investigation, Curiosity)

16. It's All a Passing Show
Upekkha (Equanimity)

I saw the book beautifully displayed at the Four-Eyed Frog Bookstore. I picked it up, put it down, picked it up, put it down, and then decided I had to have it and, once I bought it, I started right in. The cover is soft and appealing. The words aren’t capitalized on living this life fully. There is humility in that. The table of contents is very clear. I could tell the book was well-organized and accessible. I think those are the reasons I bought it. I had carried about ten books with me [on this trip], so I didn’t need another one, but something about it, drew me in.

What has amazed me is that I have read many books that teach and inspire, but this book truly brings Munindra and his message alive for us. I feel him here with me, teaching. I love how he was the embodied example of the teachings. He did the work of becoming who he was and then taught by example. He was modest and humble and powerful…so forgiving, so loving. I love how someone once said something to him, and he started to get angry, and then he moved it through. I like recognizing that each time we get angry, it is a different anger. There is freedom in that for me to let it go. I am most influenced by his words “moment to moment,” his kindness and equanimity, and [by the fact] that he let his teeth take their natural course, that he didn’t fight against aging, but instead embraced it and watched the process with curiosity. I woke with an ache in my back the other day, and I thought of Munindra and how he would meet it and observe and let it pass. I also think of him when I’m driving and of how he dealt with trains. I am using his teachings by thinking, "What would Munindra do with this?" I wasn’t familiar with him, but now he is with me somehow, and that is because of this book. I feel an acceptance, happiness, peace, joy. The title is just right: Living This Life Fully. Who could object?